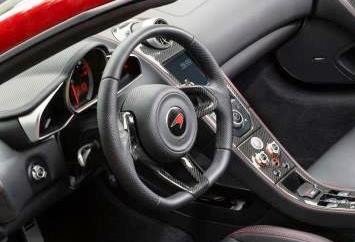 This roadster version of the line-up is another phenomenal addition to the model line. With its previous brand having outperformed some of the major competitors and big names in the world of automobiles in a road test, this model is simply an emphasis on its superiority. Have you ever wondered if you could put some zest and passion into a ferocious sleek package? Then the MP4-12C Spider answers that perfectly.

The car is well on its way to become the most desired roofless cars in the world and who wouldn’t want to drive that? Its insect wing motion doors and fordable roof makes it much easier to enter and exit the vehicle with the sort of swagger that is expected from someone who drives this daring piece. With some lightweight aluminum components and a sturdier platform, the car provides a remarkable degree of handling and performance as it moves effortlessly and responds to your every touch.

Pumping out a whopping 616 hp, the car is fitted with a 3.8 liter V8 engine that hits the road with the exact kind of fire you would expect. Inconvenience is definitely a thing of the past as it brings you more cabin space and lush interior finishing suitable for a real driver.

Perhaps the most astonishing thing about this car is the ease of drive and control, after driving the 12C Spider you definitely wouldn’t want to go another route as it takes very little effort to make it go, a flaw that is easily detectable in low-end cars. The over steer is precise and fun and lets you rev the engine just the way you want to.