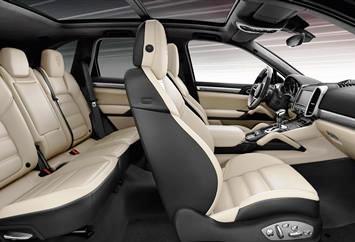 Everything about the all new Porsche Cayenne Turbo S speaks of extreme functionality and versatility. The car was apparently manufactured with the classic driver in mind as it seemed to have upped the ante considerably by bringing an entirely new and refreshed package to the road ever since its last step up. Pretty impressive right?

When it comes to engine capability, the car is exactly what you would expect it to be; a fierce combination of sports car performance and impressive off-road abilities. It brings a V-8 engine in its turbo model that delivers 570 hp. in its S trim line. The Cayenne is available in a few other trims that enables you to take a pick of the one that best gets you going.

With a 3.8 seconds 0-60 time, the Cayenne offers a 176 top speed in its Turbo S trim and makes for a pretty fun drive. One of its other highlights is that it serves the function of a much more fuel maintaining car than a lot of its guzzling counterparts.

The car is definitely not shying away either. What better way to announce your arrival than its bright red brake calipers that provides a delightful contrast to its otherwise subdued hues. With its monstrous size, one can tell that it intimidates any other vehicle on the road and easily takes its place as number one in both function and styling.