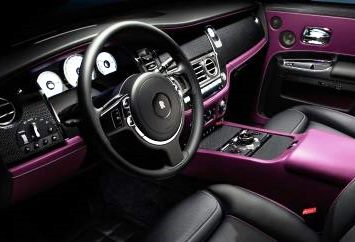 No scale could ever be used to rank the complete package that is the Rolls Royce Ghost as it breathes perfection in its entirety and should in fact be the scale against which other cars are measured. But that would be an unprecedented disaster as any other car lined up against this monster would immediately reveal all of its flaws without much effort from the Ghost. Forged with master craftsmanship, this car seemed to have been designed to perform and intimidate.

If you have never been behind the wheel of this bad boy then you still have one more benchmark to cross. It exudes an effortless aura of elegance mixed with true simplicity. A timeless classic! Perhaps, one of the more notable features of this model is its bolder presence that it brings to the table alongside a more potent performance that speaks of the ultimate expression of luxury and dynamism.

This four door and 5 passenger sedan is just as expensive as it is high performing. Under the hood, the car is equipped with 6.6 liter turbocharged 12 cylinder engine that delivers 605 lb. ft. of torque and 563 hp.

Valued at around $300,000, one can immediately see that the car is worth every penny. Designed to fit neatly into a transient lifestyle unrestricted by time zone or normal business hours, the ghost brings respect and dignity with it. It is uncompromising and easily one of most advanced cars ever built. Place your hands on the wheel and be transported into a new world from the comfort of its boisterous seats.